Howard Weil was hitting tennis balls with a friend when the shoulder pain that had been bothering him grew so intense that tears started streaming down his face.

Howard wasn’t ready to slow down, although he realized that he probably would need shoulder surgery if he was going to continue to do the things that he loved. He already had seen several orthopedic specialists for his shoulder pain. In fact, he thought he had found the right surgeon. He felt confident that someone who had performed upwards of 3,000 shoulder surgeries could get him back on the tennis court.

Howard soon learned that he needed a total shoulder replacement. He agreed to the procedure and underwent a pre-op physical and an MRI. His surgery was just a few days away when he received an unexpected call. “I’m going to tell you something that’s going to shock you,” his surgeon said. “I’m not going to do your surgery. I’ve never seen a shoulder this severe in my entire practice. You have so much bone loss, in addition to a terribly arthritic shoulder, that this is out of my league.”

Howard was stunned by his doctor’s decision, but grateful for his honesty. He asked his doctor if he knew of a surgeon who was up to the challenge. His doctor told him he could only recommend two shoulder specialists in all of the Chicago area, one of whom was Craig Phillips, MD, of Illinois Bone & Joint Institute (IBJI).

Dr. Phillips had brought his expertise to IBJI from his practice at The University of Chicago where he had focused on resolving the most complex shoulder and arm problems. Even so, he knew that Howard’s condition was extreme. “Not only did Howard have severe arthritis in his shoulder, he had worn out the socket in such a way that there really wasn’t any bone stock that we could use to do a normal shoulder replacement,” explained Dr. Phillips.

Instead, Dr. Phillips recommended a relatively new procedure called a reverse shoulder replacement. “Reverse shoulder replacement has been around for about 10 years,” explained Dr. Phillips, “and has undergone a lot of modifications that have improved the outcomes. The process is very high tech these days. We use pre-operative CT scans and create 3-D reconstructions of the shoulder. Using those models, we are now able to create implants and guides that are so specific and precise that we can devise a near perfect solution for each patient.”

“When I met Dr. Phillips, I immediately felt a very good chemistry with him,” Howard said. “He understood that my objective was not just to eliminate my shoulder pain, but that I wanted to be able to resume my sports activities with few, if any, limitations. Dr. Phillips instilled confidence that he could do this for me. He even adjusted his surgery schedule to accommodate my urgent need. Time was required to get the customized implant from the lab. Even so, he performed my procedure a mere eight days after our first consultation.”

“Howard’s case required considerable bone grafting,” according to Dr. Phillips. “This was a very complex and intricate procedure. We used the bone from the ball and placed it onto the socket of the shoulder to recreate the normal anatomy so that Howard’s shoulder would move normally once the bone had healed.”

Dr. Phillips performed Howard’s surgery in July 2016. After two nights in the hospital, Howard headed home for a four-month recovery to ensure that the extensive bone grafting had worked. Within the first week, he was able to discontinue all pain medications. Howard saw Dr. Phillips regularly, did his physical therapy religiously at IBJI, and continued to heal. His range of motion was excellent, but his strength had not returned, despite rigorous physical therapy. Dr. Phillips recommended that Howard incorporate rowing into his workouts. “This turned out to be the perfect exercise for me,” said Howard “After several weeks on the rowing machine, my strength increased dramatically.”

During a follow-up visit in November, Dr. Phillips told Howard that his new shoulder looked wonderful and that he could start playing tennis again if he felt ready for it. Howard jumped at the chance. “Dr. Phillips is my new favorite doctor! My shoulder was an absolute mess and now I can play my sports regularly with no pain,” reports Howard. “As far as I’m concerned, he can walk on water. My shoulder has recovered beautifully.” 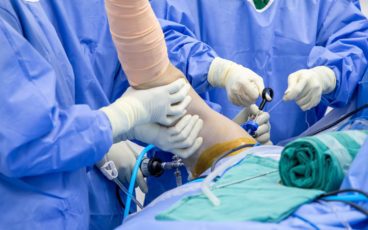