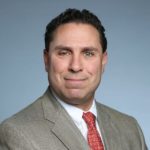 One morning in August 2020, Mike was making his way inside his house from the backyard. As he approached the step up to the door, one of his dogs ran up and cut him off causing Mike to quickly swerve out of the way. From this motion, Mike heard and felt a pop in his right foot. Keep reading to learn more about Mike’s ruptured foot tendon treatment from IBJI’s Dr. Bryan Waxman.

Mike says the pain was initially really bad and he couldn’t bear any weight on his foot. He managed to make his way down to the basement where he had some crutches in storage from a previous injury.

“I knew the injury was severe. It happened around seven in the morning, so as soon as IBJI’s doctors’ office opened I was on the phone to make an appointment.”

Mike had previously seen another doctor at IBJI, so he knew he could trust Dr. Bryan Waxman. “I have enough respect for IBJI so I knew I would be happy with any doctor they scheduled me with.”

Mike saw Dr. Waxman the same day of his injury. Dr. Waxman performed an initial assessment and scheduled an MRI for the next day. He had a hunch that Mike tore some tendons in his foot but wanted to be sure as Mike had a previous injury that left a screw in his foot which obstructed the imaging. Dr. Waxman wanted to see his foot better before making a final determination on the injury, so an ultrasound was taken.

After reviewing the ultrasound, it was confirmed that there were shredded and ruptured tendons in need of repair.

“Dr. Waxman did a really good job of explaining what he was going to do in surgery. He drew out pictures to help me understand where the tendons were torn and how they would be reattached. He would need to cut out a whole section as well as reroute the connection for some of the shredded tendons to the bone.”

One of Mike’s biggest concerns was his son’s upcoming wedding in November. He wanted to know what status he would be in for it. “Dr. Waxman assured me I would be off of crutches and in a walking boot by then which made me feel good.”

Mike had previous surgeries for other injuries so he had high confidence that this one would go well.

The day of surgery went smoothly. “My wife drove me, since I couldn’t drive with my right foot and waited in the car while I went in. They kept her informed on my status by calling throughout the procedure. Check-in was smooth and everyone there was friendly and respectful. They got me into a room and prepped, then Dr. Waxman, his nurses and the rest of the team came in to introduce themselves before surgery.”

While repairing the tendons, Dr. Waxman also worked on the bone alignment. He deduced that part of the reason Mike got injured was because he had high arches, so he straightened it out in hopes of preventing a future injury.

Mike says the procedure was simple. They took him back, he fell asleep and later awoke with a bandage on his foot. He was home that afternoon.

He and his wife set up the house for ease of access while he was on crutches. While he had the bandage he was not allowed to put weight on his foot. Four days later Mike had an appointment to examine the incisions. Dr. Waxman cleaned it up and was happy with how it was looking. A cast was applied and Mike scheduled another two week check-up where they evaluated the incisions again and applied a new cast.

After another two weeks was up, Mike went in for X-rays to make sure the bones were healing properly. At this appointment he graduated to a walking boot and was able to start physical therapy.

“Physical therapy was really good. I worked with Bridget Watson, MSPT, who I’ve had before for a previous injury. You don’t realize how much the muscles atrophy in such a small amount of time. The flexibility and strength in my foot was limited but I made great progress with the exercises. The hardest thing to do was to stand on one foot. My balance was completely gone. [Standing on one foot] is something you don’t really think about going through day to day life. I gradually increased the time I was practicing standing on one foot.”

Mike says he felt better after each physical therapy session. He continued to do the exercises they gave him every day at home. “Gradually, I added in some walking to my routine. Prior to my injury, I walked five miles every day, which I aim to get back to. Now that I have been discharged from physical therapy and had my last appointment with Dr. Waxman, I keep working on things on my own. I feel great now, it’s just a matter of getting my strength and flexibility back in my foot.”

Request an Appointment with an IBJI Physician

Need to see a doctor for foot treatment? If you need foot care, IBJI has you covered. Make an appointment today with one of IBJI’s foot and ankle surgeons—online or in-person—to learn more treatment options to get you back to feeling your best.

Request an Appointment with a Foot and Ankle Surgeon 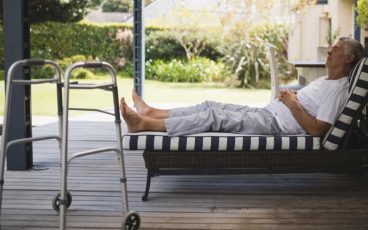